We've been talking about the new album and our 30th anniversary with Simon Bauer from the german Rock Hard Magazine. You can read the interview here... Rock Hard

Another Song from "A Secret to Hide"

Official Video for the song Flesh and Bone. The song is dealing with the topic of organ donation. A song from the album "A Secret to Hide", release date April 30th 2021. On CD, 2-Vinyl, download or stream! Get the music here: PNC Music

Second Song from "A Secret to Hide"

The Great Escape is the song with movie quotes from the 1963 film of the same name. A few guys lock up other guys and they then try to escape. That's about the story.

Official Video for the song Hollow Phrases. A song from the album "A Secret to Hide", release date April 30th 2021. On CD, 2-Vinyl, download or stream!

Welcome to the new Poverty's No Crime website! Our new album, Spiral of Fear will be released on 29th April 2016 in Europe and 3rd June 2016 in the United States. The album is available to pre-order on iTunes and will be available in CD (digipack), download and streaming format.

A preview of the album is available below. Support Poverty's No Crime by sharing the video.

An album release party will be held at the Meisenfrei Blues Club in Hankenstraße 18 Bremen on 6th May 2016 with Bleeding supporting.

Poverty's No Crime has also released their first music video for the opening track, The Longest Day to celebrate the release of their new album Spiral Of Fear. Support Poverty's No Crime by buying the album and sharing the video below.

Poverty's No Crime was founded in 1991. The first tentative musical steps were taken in their first demos. "My Favourite Delusion" and "Perfect Wings", with their first and most encouraging success coming in 1992 when they won the Newcomer Rockfestival organized by the North German radio station "FFN". Shortly after, the band hit the road as opening act of bands like Depressive Age and Waltari, and took the opportunity of underlining their unusual talent.

In the mid-90s, the band signed a contract with the Berlin based record company Noise Records, who were known in the eighties as being the label of such German metal giants as Helloween and Gamma Ray. Their debut album, SYMBIOSIS, recorded in the T&T-Studios in Gelsenkirchen and produced by John McGowan (Headhunter etc.), was released in Spring 1995 and was warmly greeted by the press. "With this homogenous, deep and convincing CD debut, Poverty's No Crime have more than fulfilled their inherent promise and have formed a solid foundation for their future", praised ROCK HARD, one of Germany's two mega metal mags.

Spring 1996 saw the release of their second album THE AUTUMN YEARS. Once again, the review pages of the metal press glowed with praise. This time, the ROCK HARD reviewer heralded the CD his album of the month, whilst EMP raved in their catalogue mag: "Proggers of all shapes, color and sizes simply must buy the album of this absolutely unique band". THE AUTUMN YEARS was received with positive reactions not only in Germany, but also abroad. BURRN, Japan's heavy metal bible, gave the album 88 out of 100 points and readers voted the Germans into the top 20 of the album charts. The musicians went on tour with Victory and followed this up with a special guest slot on the Virgin Steele/Angra-tour which covered half of the European continent in 1996. In the wake of their live performances in Spain, Portugal, Italy, Greece and Switzerland, the band was showered with tremendous praise. Despite all this, Noise Records surprisingly ended their relationship with the band.

After a generous break to consolidate their ranks, the five musicians continued to follow their dream. In January 1997, the band began writing songs for a new album. Poverty's No Crime found a new business (and ideological) home at Inside Out, at that time Germany's most important prog metal label which also had such great bands as Spock's Beard, Symphony X, Vanden Plas and Enchant under their contractual wings. Reviewing SLAVE TO THE MIND, the first result of this relationship, "(Hard Rock & Metal) Hammer", Germany's No. 1 rock music magazine, wrote in their August '99 edition: "This is what makes prog metal enjoyable - no long egoistic solos, no disturbing breaks, no endless I-love-myself arias, but just - despite opulent decoration - straight arrangements, memorable hooks and melodic choruses...Some of the material reminds me of the glorious Marillion days ("Wind And Light"), some of early Fates Warning ("The Senses Go Blind"), and yet SLAVE TO THE MIND never loses its own individual touch. A great album from a great band!"

In late 1999, Poverty's No Crime faced the first major line-up change when Marcello Maniscalco on keyboards and bass player Christian Scheele left the band for other projects. Unimpressed by this loss, new material was written by the remaining three musicians. However, just before entering the studio for the recordings of ONE IN A MILION, the right guy for the vacant position behind the keyboards was found: Jörg Springub proved the perfect fit for the band with an impressive performance on the record. ONE IN A MILLION was released in June 2001 and once again the international music press showed remarkably positive reactions. Right after the album release, bass player Heiko Spaarmann completed the line up and the combo played some successful shows together with bands like Vanden Plas, Zero Hour, Pain Of Salvation and Anathema.

Two years later, Poverty's No Crime took a deep breath of fresh creativity. Again they spent two months at the Soundgarten Studio and the result hit the record stores in 2003. At the end of October 2003 THE CHEMICAL CHAOS, the bands' fifth record was released in Europe as well as in North America via Inside Out Music. It received overwhelming positive reviews in the music press such like "album of the month" in Germany's METAL HEART, "10x dynamite" in ROCK HARD magazine and many more. With this and a bunch of club and festival gigs booked to support THE CHEMICAL CHAOS the band suffered from an unforeseen setback due to health issues. Volker had to pause from all band activities for more than a year. Besides some ongoing songwriting this caused in fact a break until the year 2005 when the band got back together and decided to start the preparations for a new album.

In March 2007, the band entered the Area 51 studio (Guano Apes, Helloween, Gamma Ray etc.) in Celle, Germany with producer and Victory guitarist Tommy Newton. Nine brand new songs reflecting the stylistic variety of POVERTY'S NO CRIME were released in August 2007. The record SAVE MY SOUL represents the heavier side of the band. Again it was highly acclaimed by the international rock and metal press, e.g. 8 points out of 10 from Germany's Rock Hard magazine. Followed by some touring and successful support shows with Threshold the band took a creative break to elaborate on new songs. This break turned out to stretch over a period of nine years. However, the band has never stopped to meet for rehearsals or to work on new material. Their activities simply did not result in the recording of a new record as for most of the band members family and children became the first priority in their lives. Besides a "reunion show" in front of a crowd of 500 people in 2014 featuring guests and the original line up for some songs and a couple of local dates in Germany, the live activities were almost shut down during that period. Other musical excursions were time consuming as well: Marco and Theo started the band LEVEL FIELDS with Alan Tecchio (Watchtower, Hades, Non-Fiction) on vocals. Heiko joined the power metal band Assignment with Argentinean singer Diego Valdez (Helker, Necronomicon).

However, with a bit by bit recording attempt in different studios (e.g. in Jörg Uken's Soundlodge Studio) over the past three years, Poverty's No Crime finally finished the accursed seventh album. Entitled SPIRAL OF FEAR, it will be released in spring 2016 on the German based label Metalville. Mixed and mastered by Simone Mularoni (DGM, Empyrios) at his Domination Studio in San Marino, it represents possibly the most mature sounding piece of music the band has ever recorded. With an intuition for melodies that come with astonishing implicitness and songs that put the label "progressive" never close to being intrusive but make it just sound natural. It represents the band's complete musical scope from intoxicating heavy guitar riffs and inspiring melodies to intense instrumental passages and catchy choruses. The release will be accompanied by live activities during the next months.

The band has never sounded as good as on this record - Poverty's No Crime is back!

by Matthias Mineur and Poverty's No Crime 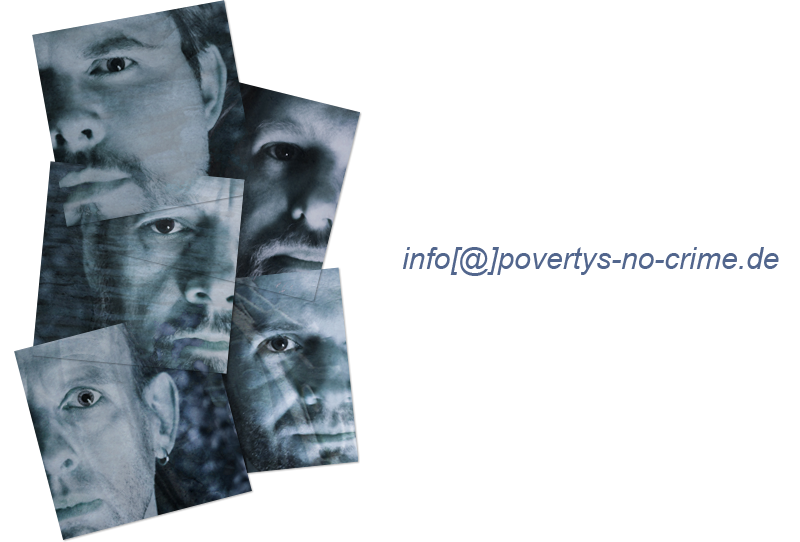